How To Make a Sideways Room: 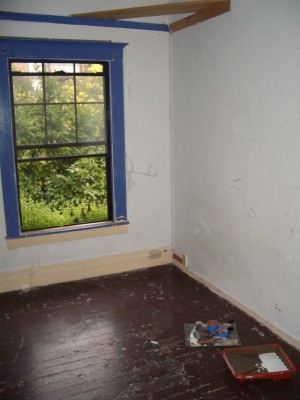 Step 2. Paint the entire room white — including the floor. 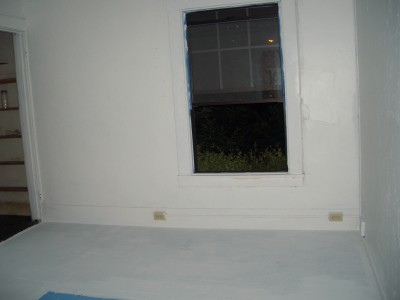 Step 3. Paint a window on the floor, just for fun. Then let the paint dry overnight. (I used electrical tape to make the window frame and bars.) 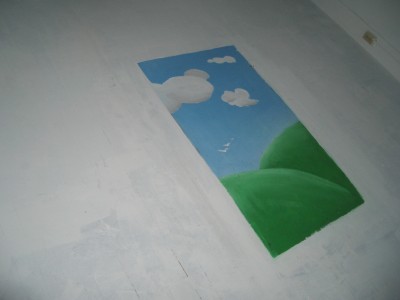 Step 4. Bring in a couch, nail up a rug on the wall, and hang a table over it (we used monofilament thread from the hardware store). 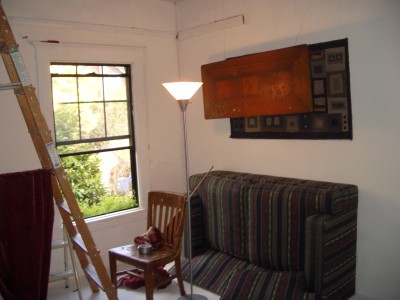 Step 5. Add a poster and a light switch on the ceiling for effect. (We also threw in a fake power outlet mounted sideways on the far wall, which you can see in the first picture up top. The other outlet in that picture, which looks much too high to reach, damages the effect — I should have painted it white.) 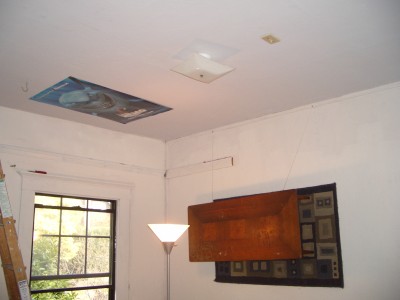 Step 6. Reinstall the curtain rod and tack up the drapes to make them hang sideways. Stick some stuff to the table in a suggestive manner. 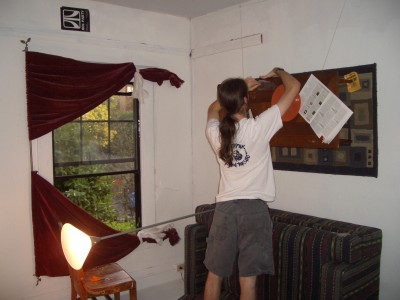 Step 7. Nail a trash bin high up in a corner of the room, and arrange some trash around it. "Lean" a broom against the ceiling (again using monofilament thread). 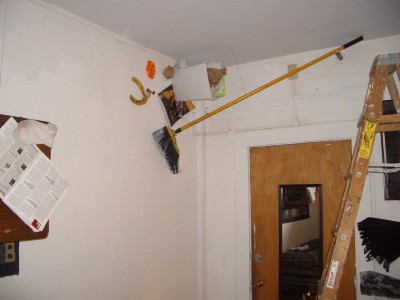 Step 8. Add a bookshelf and fill it with books. Also add an end table and hang a lamp on it. 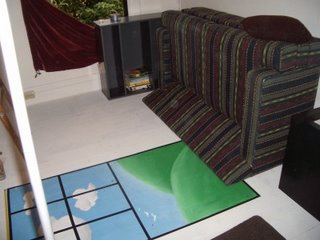 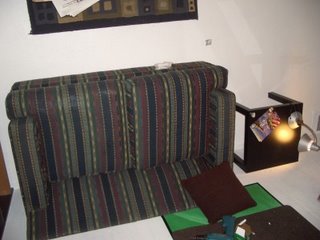 Step 9. Suspend a ceiling lamp and its cord so it "hangs" sideways out of the opposite wall into the middle of the room. (Unfortunately, we don't have a good picture of this.)

Step 10. And the coup de grâce — affix a chair high on the wall (using metal L-brackets). This one change suddenly added a whole new level of vertigo. Standing in the room began to feel like floating overhead. 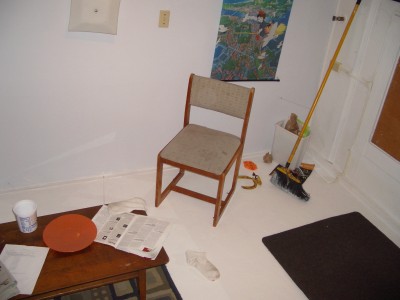 Step 11. Cackle evilly. Or giggle uncontrollably. Or both.

The whole thing took two days (one day for painting, one day for arranging everything else). Hope you enjoyed this as much as we did. This project really made me want to do crazy art installations for a living. 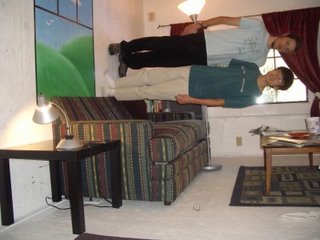 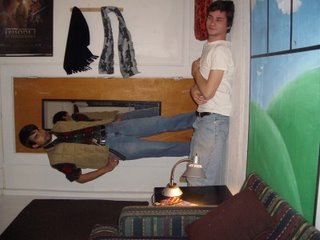 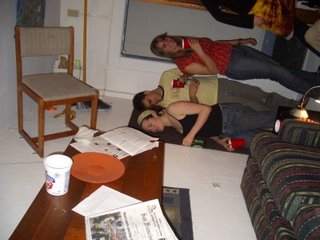 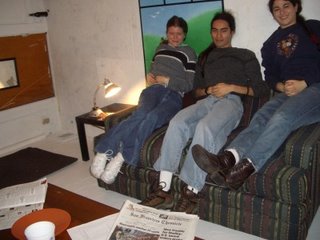 Nice imagination ;) Even though it looks pretty sweet, I don't think I'd try it in my house anytime soon.

maybe you guys could use this, sometime ..

Nice. Ive now decided to have at least one "sideways" room in my future house, and invite guests over into it.

You've got too much time on your hands but I like it. Wish I could get round to doing something as daft as this. :-)

It's a superb artistic idea!

aww...now im having a headache

That's fantastic! Let's see if I can persuade my wife to let me redecorate the home :)

Anybody throw up in the room yet? :)

I think I just fell in love with you. All of you for ever and ever.

you're so getting linkage from my blog tomorrow... this is the best idea ever! How do you come up with all of this stuff?

I need another post from you guys soon, don't leave me hanging!

hehe i am giggling uncontrollable, thinking about my future home, (which i want to be crazy anyway, your idea fits in nicely)

hehe invite over some guests and tell them that its their room but sometimes in my house things can get a little crazy, :D that would be fun,
thanks!!!

nice...you guys should be on the "extreme make-over" they would flip out

Who makes a sideways room? You must have a lot of time on your hands.

That is SO COOL! When I have my own house, I'm totally having a sideways room...

its cool, but how bout making an update to the site, its been months

yeah slackers. Get back to work, we are waiting you fekkers...

you should put the door sideways and leave it closed.
people will feel pulled to see why its sideways.
just looking at the pictures made me dizzy.
if i didnt have to actually use it id do my room like this

thats so cool! a bit of a waste of space and time but very cool!

LMAO I LOVE IT!! This is way too funny, I could really screw with some ppls heads doin this lol lol

This is so great! What a creative idea.

this is a cool idea, but who would waste the time and space to make an empty unuseable room. I bet the people who did it in the pictures are already using it for a storage room.

I think you should put a fish tank in there some how... That would make it even cooler

Cool. This is really cool.

lol great room to do drugs in. everything would seem normal! lol

sweet! For version 1.1, you need to make the fake window the same proportions as the real one, that was the big spellbreaker for me.

I've long dreamed of taking a photo of a room, projecting it back onto the room but at a skew angle, then tracing the projection in paint. So when you stand at the door you subconsciously think the room's at a slight angle to what it's really at. I don't think I'll ever do it though, RL keeps intruding!

That looks awesome. I'd love to do this to one of the rooms in my house. Just imagine waking up and walking into a sideways room.

You just have to find a way of placing an LCD TV in place of the window, and have it broadcast from a webcam outside the party - so people can "see" outside...

If you have a party and someone passes out, drag them into that room. They wake up and think they are crazy.

that would be hilarious about the guy passing out. this is pretty cool, im doing this for a photo shoot, this helped a lot! good job!!

Hahahahah!!! that is so funny :p Great that you guys just did it :p

Can we say AWESOME APRIL FOOLS TRICK???? Thanks for the idea

hahaha!
this is so great! i think its incredibly creative and original and i love it!i would be so confused if i walked into a room like that id be like wait what? and probably get all dizzy and such!

Kudos to you guys for the creativity and imagination!

Nice, do you ever spill your drink when pouring in this room?

Your blog color and post are very interesting. Pls visit my blog too - http://myincomebridge.blogspot.com/

I think it looks kind of neat but I don't think I will hire you to decorate my place, lol!

You have got a lot of time to deal with but I favor this. Really wish i could engender rotund so that you can doing a little something equally daft as this.
runescape gold
rs gold

AWESOME. It would be cool if I could do this to a spare room or something

Your post really cool and interesting. Thanks very much.

Thats a good' article, i usually amazed with' this thing, i asked myself about this opinion, I wish You'll a better articles that can make another people live..don't make the article feel rigit and isn't interesting and poor, i like to read this' article and i think this is "good".thank you' m'y brother...........

Wow, You made that look easy as pie. I know it had to be a challenge. Your vision for that home improvement turned out perfect! Mary S. Hernandez

Thanks for information gan

Thanks for sharing this article. Verry nice:)

In my opinion, what you have said will definitely be very interesting for all readers, especially me
I think this information is really incredibly good, and I'm very happy for all that you've shared this
Greetings know and good luck always

Do you like playing Path of Exile?And if you want to buy Buy FFXIV Gil,FFXIV Gil, MMOAH.com is a best choice.You can have a look to its homepage, you will find all kinds of game currency.

This shoe is really interesting. If you are a game enthusiast and don't know where to buy a cheap FFXIV Gil, please visit our MMOAH website to purchase.

If players want to Buy Animal Crossing Bells to accelerate their growth, they can find it on MMOWTS. They not only have cheaper prices, but also have better services. This kind of experience is good. In addition, there is the Animal Crossing Nook Miles Ticket you want. I am also playing this game. This is a website I often browse. Not only do they have good prices, but they also have good service. Players may be online at different times and will have demand at different time periods, but you don't need to worry. Because they are online 24 hours a day, it would provide great convenience, wouldn't it?

At present, there are many websites on the Internet that are selling TBC Classic Gold, but if you want to save money and buy more Gold, then MMOWTS will be your good partner. Because they not only provide very cheap products, but they also provide the fastest delivery speed on the market. You only need to make a successful payment after placing an order, and you can receive the products you want in a short time.

POECurrency.com is best site that can provide 100% Safe and Cheap Path of Exile 3.16 Currency. Buy POE Currency with Instant Delivery and Best Service.

Thanks on your marvelous posting! I quite enjoyed reading it, you’re a great author.I will make sure to bookmark your blog and will often come back in the foreseeable future. I want to encourage you to definitely continue your great posts. Business Idea