How To Make a Hookah Out of a Lava Lamp 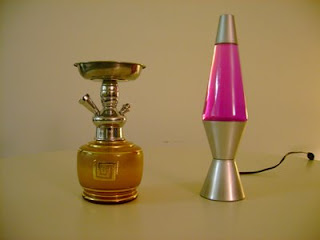 What do these two objects have in common? They can both become your vessel for a superior smoking experience!

In a previous Hookah Love Blog post, my buddy Christophanes busted the myths that surround small and tall hookahs.   I will add to the argument that a tall hookah is not always necessarily better. For example, the Mya Chic Hookah, which was meant to be portable, versatile and reliable, is one of many products on Hookah-Shisha.com that carries their stamp-of-approval to provide you with an enjoyable hookah experience, regardless of size.

But a major concern with most hookah owners is aesthetics. Tall or novelty hookahs look cooler, which is the appeal of most people. Well, if you own a Mya Chic, or any hookah that has a female-fitting stem, then you’re in luck because in this article I, Tatum Vay, will show you how to transform that Mya Chic into an awesome Lava Lamp Hookah that will leave your tall-hookah-owning friends in envy!

1.  Mya Chic Hookah (or any hookah that has a female-fitting stem)
2.  A lava lamp (new or old doesn’t matter, but preferably one with a working lamp. It works best with the “generic” lava lamp, where the globe is listed as having 20 ounces of liquid in it.)
3.  An empty soda can (or tubing that fits around your downstem)
4.  Kitchen shears (or scissors)
5.  Gloves
6.  Empty, heat-proof vessel (to dump “lava” from the lamp out)
7.  Bottle opener
8.  Coat hanger or hook

I’ll be making this Lava Lamp Hookah out of a Mya Chic Hookah, but I’m sure that any hookah in which the stem fits on to the base, a female-fitting one, can be used for this application (Editor’s Note:  This includes the Mya QT, Econo Mya QT,Econo Mya Gelato, Mya Bambino, Mya Razo, Mya Piccolo, Mya Nou Nou, and the Mya Gelato Hookah.) 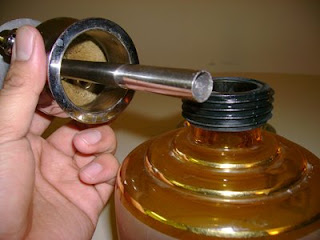 The Mya Chic’s female-fitting stem.  Notice how the stem fits “over” the base.

Follow my lead young Padawan. Notice that the globe is topped off by a bottle cap.  You can pop this off easily later to drain the liquid out.  But first, start by heating up your lava lamp. 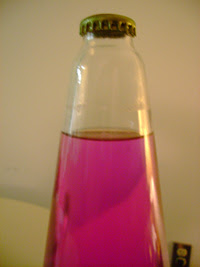 Not a delicious soda pop.  Do not drink!

Now a quick lesson on lava lamps:  There are 2 basic ingredients, which we’ll call liquid #1 (mostly colored water and oil) and liquid #2 (mostly wax).  Liquid #2 is less dense than liquid #1 when warm, and solid and more dense when cold.  Much like water an oil, these two ingredients don’t mix together.  liquid #2  is solid when cool and rests at the bottom of the lamp.  When the lamp is turned on, the light bulb will heat the solid component (with the help of a metal coil in the bottom of the glass) which causes it to become less dense and float to the top, where eventually it will cool and sink to the bottom where the process is repeated.   Hence the “lava” effect.  Anyways, back to the task at hand:

If you are using an old lava lamp without a working “lamp” then do the following:  Find a container that can hold enough water to cover 2/3 of the globe.  Fill it up with hot water. You’re going to have to keep replacing the water until the liquid starts to flow, or find another way to gradually heat the lamp.  IMPORTANT:  Do NOT by any means heat the glass on a stovetop, oven, or microwave.  This can cause the glass to explode and could be potentially fatal (as seen on Mythbusters on the Discovery Channel).

Now, remember that bottle cap at the top? We’re going to remove it. Put on some gloves to protect you from the heat of the globe and shake the globe vigorously to mix the two components together. Remove the bottle cap with your bottle opener and drain the entire thing into your heat-proof vessel. 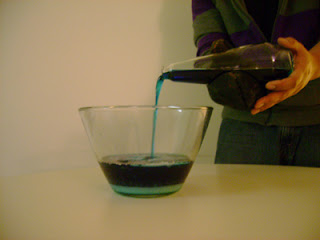 Don’t forget the gloves!  This is a re-enactment so it’s not hot.

Let it cool down so you can remove the solid part and throw it out (you don’t want to dump that into your drain and let the wax solidify and clog things up for you). 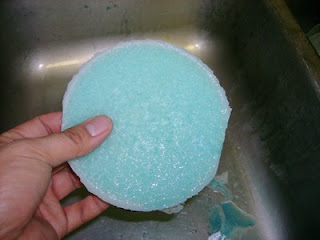 Throw this in the trash so it doesn’t clog your pipes.

Now using a bent coat hanger or hook, catch the metal coil and pull it through the opening of the glass. Discard it or decorate it and sell it as a bracelet.  Your choice. 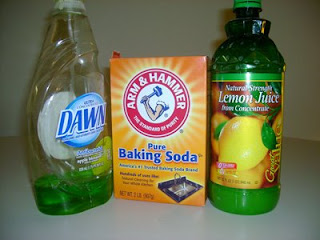 Now, we need to extend the length of the downstem of the Mya Chic because we need it to be long enough so that the bottom is about a half-an-inch underneath the surface of the water. However, we don’t want the water to fill up the majority of the base, giving less room for smoke.

I have achieved this with an empty soda can. We are going to cut out a long piece and roll it up to make it an extension of the stem.  Cut off the top part and the bottom part so you have a flat “sheet.” Carefully, without cutting yourself, roll this up so that it fits into the stem. It will naturally want to unroll, which will make it conform to the size of your stem and keep it airtight so no smoke will escape during the pull. 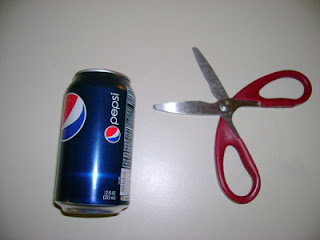 The tools you’ll need to create a “downstem extension.”

A rolled up soda can  makes a nice extension for your downstem.

If you prefer to go the extra distance and find some kind of tubing that will fit your downstem, then by all means go ahead. Make sure it won’t be anything that will react negatively to the heat of the lamp at the bottom.

Rinse out the globe one more time. Take the grommet that fits around the base of the Mya Chic and work it around the opening of the lava lamp. This will create the perfect seal needed for your super-smoking hookah. 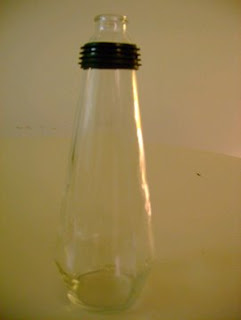 The next part is very simple; just place the stem of the Mya Chic onto the Lava Lamp. Check for the appropriate seal and make sure the stem is extended enough into the globe.  Place the globe back onto the lamp base. 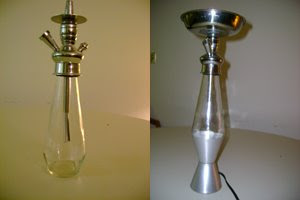 Now you can remove the stem and fill the lava lamp up like usual, put the stem back on and start smoking.  But let’s talk about base liquids:  It’s a lava lamp, it’s meant to be colorful and fun!  So why not use some blue sports drink? Or maybe some Kool-Aid or fruit punch?  If you feel silly about using juice for the liquid, pick up some food coloring.  Whatever you do you’ll want there to be color when you turn the light on.   Why else have a lava lamp hookah? 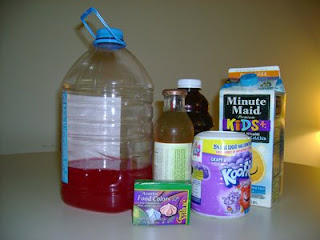 Choises, choises.  Is it in you?

I know what a lot of people are asking: “Won’t the lamp make the water hot and make the smoke harsh?” Well, whatever myths about this you might have heard can be busted.  I’ve smoked three sessions in a row with a phunnel bowl (almost four hours total) and no harshness from the heat.  Also, with the removal of the metal coil, the liquid won’t heat up as much. 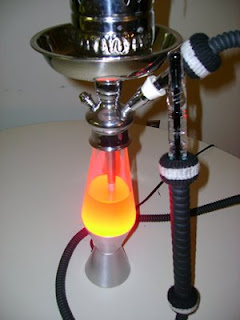 So there you go! Pair with your favorite Nammor hookah hose, pack a  phunnel bowl with some Starbuzz Blue Mist or any shisha of your choice, heat up someCoco Nara Charcoals and enjoy your new lava lamp hookah!

So, whether you want to spruce up your Mya Chic or just love novelty items, you can make your own lava lamp hookah and be the envy of the neighborhood.  It just goes to show that size does matter, but bigger is not always better. 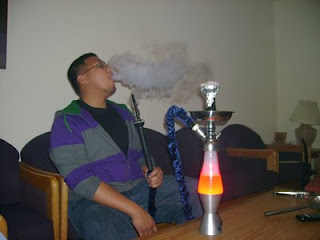 Cheers and happy smoking!
Original article by Tatum Vay reproduced with permission from hookah-shisha.com.
Posted by How To Do Stuff at 3:39 PM 89 comments: